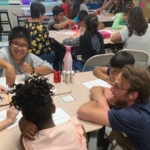 Dan Turner-Evans has some advice for the students of St. Thomas’s Day School: “Don’t be afraid to explore and try new things. If you like learning, follow your heart wherever it goes.” These are wise words from a former St. Thomas’s student who envisioned a life working in engineering and applied physics but has found himself instead in the field of neuroscience.

A graduate of St. Thomas’s, Hopkins, Yale (B.S.), and Caltech (Ph.D.), Daniel has carved his own path, with twists and turns reflecting his love of learning and myriad interests. While at Caltech, Dan’s area of study was solar cell technologies. Solar cell research combined his intellectual interest in applied physics with his moral and ethical interest in climate change. However, as he learned more about solar cell technologies, he came to believe that the most important advances in the field weren’t happening in university labs. The biggest changes were taking place in industry and in policy. He therefore split his intellectual and ethical interests. He decided to study brain cells instead of solar cell and to engage in green energy policy outside of work.

Dan is currently a research scientist at Janelia Research Campus in Virginia, which is part of the nonprofit Howard Hughes Medical Institute. Dan studies the brains of fruit flies in an effort to hopefully better understand the human brain someday. Dan writes, “One in six adults suffers from mental illness. While treatments continue to improve, our understanding of the brain is still woefully inadequate. We have hundreds of billions of neurons and can’t just go around inserting electrodes into people’s skulls to measure what those cells are doing. As a physicist, when I try to solve a problem, I start by tackling simpler problems first and then build up complexity. Thus, in trying to understand the brain, I’ve started with the humble, though surprisingly complicated, fruit fly. I explore how flies’ brains are wired with the hope that we will reveal principles of cognition that can be applied to all animals.”

Outside of the lab, Dan is active in local politics. He has joined with other scientists and engineers to help inform local legislators about energy issues and to work with them draft legislation that tackles climate change. Additionally, he goes into local elementary schools in low-income neighborhoods and introduces them to neuroscience, helping to develop lifelong learners just as his teachers did for him at St. Thomas’s. “My relationship with the teachers at St. Thomas’s was really special. I remember their patience, kindness, and enthusiasm, and it helps me to try to become a better teacher,” says Dan. And when asked if he sees a parallel between his time at St. Thomas’s and his life now, he replies, “I was always taught to be good to the people and to the world around me first, and I try to live by those principles.”

At. St. Thomas’s we often declare that our alumni stand up and stand apart, and Dan is no exception as his work and his activism defines an alumnus who cares first and foremost about the world and community for which he lives.

← Community Gathers for Alumni/Parent Reception
Our Students are Stacking it Up! →
Login