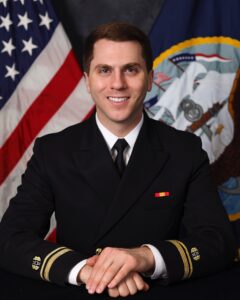 Coming from a family of lawyers, it might not be a surprise that both Greco brothers took up the same profession, however each has done so in their own individual way. Sam is a 2005 graduate of St. Thomas’s, a 2011 graduate of Hopkins School, a 2015 graduate of Georgetown University, and a 2019 graduate of Georgetown University Law Center. Sam earned a Bachelor of Science in Foreign Service, majoring in International Politics with a concentration in International Security. While at Georgetown, Sam was elected to the Georgetown University Student Association Senate and served as a Law Clerk for the United States Senate Committee on the Judiciary. Between college and law school, Sam worked as a Defense and National Security Consultant with Ernst and Young.

After graduating from Georgetown Law, Sam commissioned as an officer in the Navy JAG Corps. He is currently a JAG attorney at Naval Station Mayport in Jacksonville, FL focused on criminal litigation and defending service members. Sam says that having the experience of being in the military has been very rewarding and informative and that while he does not know exactly where his future plans will take him, he hopes that law and politics will be a part of them.

Sam and Peter’s trajectories are quite different, but both incredibly impressive. When asked for words of advice for our current St. Thomas’s students, Sam says “Be confident. Anyone graduating from St. Thomas’s already has a strong character and intellectual background, so believe that if you commit yourself to something, you can accomplish it. Be bold. Take big steps, smart risks, and don’t be afraid to walk away from what everybody else is thinking or doing. If you have a different idea, a better idea, pursue it.”