St. Thomas’s Day School does tradition well and today marked the 30th year of the Kindergarten play, The Mitten. With a fresh cast, our Kindergarten nailed the performance and delighted their audience.

The Mitten is an old Ukranian folktale retold by author Jan Brett and tells the story of Nicki, a child who loses the mitten her grandmother knitted for her in the snowy forest, and the animals who find it and use it as a shelter from the cold. The Kindergartners performed to absolute perfection, each child with a set of lines and almost all with a solo.

Kindergarten teacher Norine Page, who has directed the play in all of its years, not only spent time rehearsing with her students, but led them in a journey to explore their assigned parts. They wrote poems about their characters and even helped contribute to the set design – drawing and painting the characters that hung around the border of the stage.

In the audience were six years worth of past The Mitten performers, who found great excitement in seeing which Kindergartner was playing “their part.” The smiles were wide as they delighted in the memories of their time on stage as Nicki, Baba, or one of the many creatures of the forest.

Next up, St. Thomas’s will present the first grade play The Empty Pot on Wednesday, February 13. 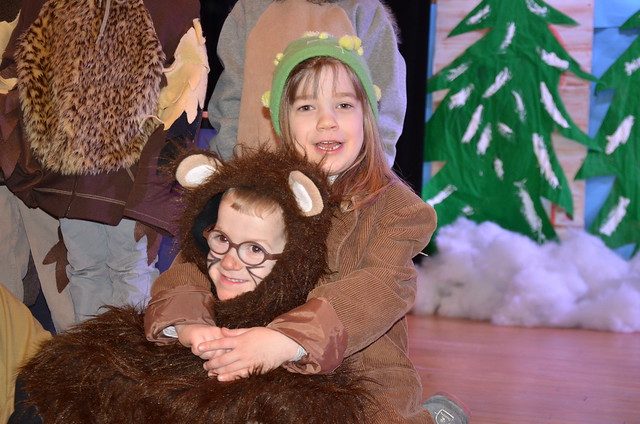 We are currently accepting applications for the 2021-2022 school year.

Why St. Thomas’s Day School? Click HERE to see what makes our school unique or
click below to apply by the February 1 deadline!